Listen my friends to the story of a human being. A human being facing injustice at the hands of justice. Dr. Farid Uddin Ahmed is an ophthalmologist by profession and a distinguished philanthropist. Resident of Kaderabad Housing Society at Mohammadpur, Dr. Farid was, incidentally, also the ex-ameer of Jamaat-e-Islami at Madaripur. On the 12th of March, he went to offer his Maghrib prayers at the mosque in the Housing Society and did not return. Fearing the worst, his family filed a General Diary (GD No. 865) the next day at Mohammadpur police station. Allegations rose that he had been secretly nabbed by Detective Branch, the special branch of police, whose headquarters are situated at Mintu Road in Dhaka. Family sources say that tracking his mobile phone number revealed that he was located at Mintu Road. However, when contacted via different sources, the law enforcement agencies repeatedly denied any involvement in his disappearance. Thirteen days passed. A report was published by the news daily Naya Diganta which detailed the circumstances of his disappearance, presenting statements by the family of Dr. Farid. It was a reiteration of the fact that he was still missing. There was still no response from the law agencies. It was a Friday (29th of March), when the world came to know of Dr. Farid's whereabouts after 18 days of his disappearance. 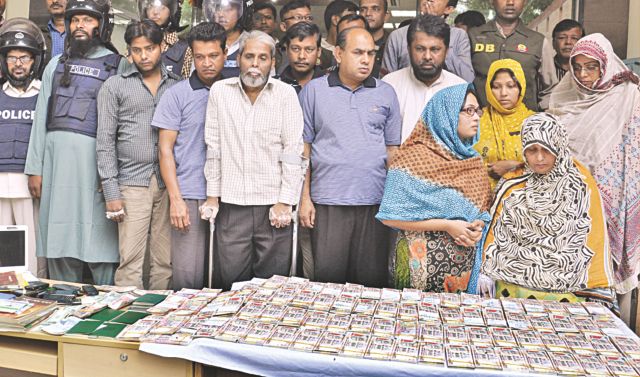 Said the Daily Star, "Police in the capital have arrested 12 alleged militants, including a former Jamaat leader and an Afghan war veteran, with bombs, bomb-making materials and Tk 1.29 crore in fake Indian currency. Of the 12, all arrested on Friday night, one is a former Islami Chhatra Shibir leader and the rest are members of different terrorist outfits like Harkatul Jihad al Islami (Huji) and Harkatul Mujahideen and Allah’r Dal. In a separate drive the same night, the Detective Branch of police arrested four Pakistani nationals with fake 6.3 million Indian rupees. Briefing newsmen, DB Joint Commissioner Monirul Islam said the arrested Bangladeshis were preparing for subversive activities, including attacks on public gatherings and eminent personalities.To remain financially secure, they were counterfeiting money in coordination with the Pakistani nationals.
The seizure also includes eight hand-made bombs, $400 in cash, 4,000 Pakistani rupees and seven passports — four Pakistani and three Bangladeshi. DB officials said they first arrested former Madaripur district Jamaat unit Ameer Dr Farid Uddin Ahammad, 55, Afghan war veteran Farid Uddin Masud, 35, former Shibir cadre Mizanur Rahman, 31, and militant activist Mahfuzur Rahman, 23, at a house on Free School Street, Kathal Bagan, with bombs and bomb-making materials."
So Dr. Farid was now 'officially connected' to Huji, Harkatul Mujahideen and Allah'r Dal. As usual, it was hailed by pro-government cum anti-Jamaat media as being Godsend, and as one version of the story morphed into another, the story of Dr. Farid Uddin Masud got more and more outlandish as the statements made during the DB briefing turned into 'established facts'. Take this line from the Financial Express, "The arrested Jamaat leader, an eye specialist, Dr Farid Uddin Ahmed, took training on militancy in Pakistan.", or this line from the Daily Sun, " He (Dr. Farid Uddin) also formed an Islamic party styled 'Allar Dal' and was involved in destructive activities in different parts of the country", and you get the picture.
The synchronization of events seemed to be in such perfection that it all seemed to ring true. Except that one tiny detail was missing. None of these triumphant news agencies mentioned that Dr. Farid was actually reported missing or that the family of Dr. Farid had filed a GD in this respect. Except of course the good old pro-opposition news agencies (what would we ever do without them?).
Further injustice was to follow. As reported by the New Age, a metropolitan magistrate on Friday remanded those 16 people including ophthalmologist Dr. Farid in police custody for different periods in three cases filed with three police stations. The metropolitan magistrate, Joynab Begum, rejected the bail petition filed by six arrested Jamaat and Chhatra Shibir leaders while none attended in the remand hearing for rest of the ten arrested. The defence counsel, Abdur Razzque, who stood for arrested Farid Uddin Ahmed and five others, told the court that his client ophthalmologist Farid Uddin of Madaripur was picked up by the Detectives in Mohammadpur area on March 12. He submitted to court a copy of general diary and paper cutting of a national daily in support of his claim. Razzque said that a detective team brought him to his house in Mohammadpur at about 4:00am on Saturday. The defence counsel, sought court instruction for illegally detaining his client for 18 days. But the court remanded Farid Uddin Ahmed, also a senior Jamaat leader, and five others for three days each in police remand in one of the three cases filed with Kalabagan police station under explosive substances act. The court also remanded for seven days each the four Pakistani nationals who were, according to police, arrested at Baitus Samir Hotel at Bangshal in the early hours of Saturday.
New Age took the brave step to look deeper into the myth of Dr. Farid's arrest on Friday. The report, in a useful addition, said , "However, Farid’s friend Ehtesham, also a physician, claimed to reporters recently that the DB police picked him up on March 12 from a mosque at Mohammadpur and they lodged a general diary with Mohammadpur Police Station after this."
Reflect on the above and you don't need a political or judicial analyst to tell you that most glaring is the fact that the security forces are still in denial over the fact that Farid Uddin Ahmed was ever absent for 18 days. The whimsical denial of the metropolitan magistrate to give any consideration to Dr. Farid's case of disappearance points to a simple case of denial of justice. Appalling as it may seem, most of the media have followed suit and have chosen to ignore this fact and simply remain silent.
Condone the silence and denial and all you will do is loudly condone injustice. Stand up and speak out. Its time to speak up and #savebangladesh
23490 views 2 comments