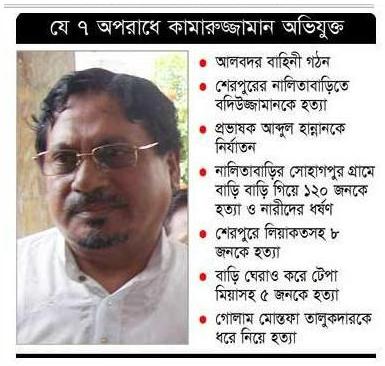 Muhammad Kamaruzzaman was detained on 13th July 2010. He was “shown arrested” on 22nd of July 2010 in a case filed by Shahbag Police Station for “obstructing police while they were discharging duties”. After enduring almost 2 years in prison without any charge, Kamaruzzaman(KZ afterward) was finally charged with 7 cases. The charges are based on seven separate incidents of “crimes against humanity”. Trials for these cases began on 2nd July 2012.

The summary of the charges:

It is alleged that the accused inhumanly tortured Prof. Syed Abdul

Hannan of Sherpur College for his anti-Pakistani stand. He was stripped off his clothes, head shaven, and forced to walk around Sherpur town as the members of Al-Badr, including the accused, hit him with a whip.

Position: The prosecution failed to produce Prof. Hannan as a witness though he is alive. He is very sick now. Prosecution forced him to be a witness but when he affirmed that he would not lie, they did not present him as a witness. The other two prosecution witnesses who tried to verify the incident were not eyewitness to this particular incident and gave contradictory statements.

Assessment: I believe this case doesn’t stand a chance.

It is alleged that under the leadership of the accused, a group of Al Badr members abducted Badiuzzaman from Ramnagar village of Jhenaigati, Sherpur. He was tortured at Ahammed Nagar army camp all night long and shot to death the following day. His body was dumped in a river.

Position: The prosecution produced Badiuzzaman’s brother Hasanuzzaman as a witness. Along with many inconsistent statements, he said that he and his family heard from some farmers who saw KZ and his gang kill his brother. However, this hearsay was not substantiated. Hasanuzzaman claimed that his family filed a case against KZ and 10 others in 1972 for the murder of his bother, but the prosecution failed to produce anything to support that. In our investigation found the FIR mentioned by the prosecution which is completely a different case and the accused name is not there!

Unfortunately this Kangaroo court did not allow defence team to submit the FIR copy because it was not certified. Under current situation, no government servant would give a certified copy of crucial legal docs. So it could not be submitted. The prosecution on the other hand did not submit any document to support their claim.

Assessment: This does not have any merit and based on hearsay, but the Awami Judged could find the hearsay “enough” to punish the accused.

It is alleged that the accused was instrumental in an attack on Sohagpur village (aka Bidhoba Polli) by Pakistani Army. On 25th July 1971 Pakistan Army and their local collaborators raided the village, raped many women, and killed at least 120 people.

Position: Prosecution produced 3 widows as witnesses who gave their testimony in a “camera trail”, meaning only the judges, said witness, prosecution and defence lawyers were present during testimony. Hosen Bewa, whose husband was killed by the Pakistani army during the raid, said that she heard from local elders that it was KZ who led the army into the village and was present when the atrocities took place.

Hafiza Bewa, one such witness, claimed to see KZ at the scene, but she never claimed so in the original testimony that she gave to the Investigation Officer (IO) earlier.

Korfuli Bewa, another such witness, said that she heard of KZ involvement from the elders of the village. None of the “witnesses” claimed to have seen/known the accused in the statement they offered to IO, this contradicts the statement they gave in the court. This is in fact a major contradiction.

Interestingly, many of these widows including Korfuli Bewa were interviewed in a book named “Sohagpurer Bodhoba Konnara” that documented the Sohagpur genocide. KZ’s name did not came up in any interviews or incidents.

In response, defence team present a very strong witness. He was from a victim family who lost his family and everything when the Pakistani Army raided their village. He claimed that KZ was never associated with the incident for last 40 years, not even after Shohagpur was recognised as Bidhoba Polli in 2007. It is only associated since 2011 after prosecution filed the formal charge. He also mentioned that people of the village are well aware that the prosecution witnesses received cash and privileges from govt to lie against the accused.

Assessment: I believe this case doesn’t have a chance, but three women were brought to testify for this case and we believe they are counting on it.

It is alleged that the accused abducted and killed Golam Mostafa Talukdar on 23rd August 1971. Talukdar was abducted on Kamaruzzaman’s command, taken to the Al-Badr camp at Surendra Saha’s abandoned residence, then the accused along with several other men took the victim and one other person, Abul Kasem (now dead), to Sheri river and shot them.

Position: The prosecution produced the brother of the victim Mosharaf Hossain Talukdaras a witness. He said that his family later heard from Abul Kasem, who was also taken to be killed with Golam Mostafa but managed to escape, that the accused was present at the scene. Mosharraf Talukdar was only 11 years old at the time of the incident. There is no reason to take his hearsay testimony seriously.

Moreover, he is associated with local “Gahatak Dalal Nirmul Committee” (a Ruling party backed radical organisation who campaigning since 1992 to wipe up so called collaborator in liberation war-their involvement with current ICT is highly controversial in Bangladesh & abroad) . So his motives should be clear before the court. One other witness tried to verify the incident, but he too was not direct eyewitness and both statements contradict each other on time, place, and order of occurrence.

Assessment: This does not have any merit and is totally based on hearsay. A hearsay cannot be verified by another hearsay, but the Politically appointed Judges could find the hearsay“enough” to punish the accused.

It is alleged that the accused abducted Liakat Ali and Mujibur Rahman Panu and took them to a Razakar camp in Raghunath Bazar. They were tortured and then sent to a police station. Then after 4 days on Kamaruzzaman’s direction they were transferred to a Pakistani Army camp in Jhinaigati. They were lined up with 11 other people, but later Liakat, Panu and 1 other were excused. The rest were executed. The accused was present at the scene.

Position: The prosecution was able to produce both Liakat Ali and Mujibur Rahman Panu as witnesses. Despite being a prosecution witness, Liakat Ali testified that KZ was never present from any point of their abduction, detention, or torture. Panu, the other witness, however said that he did not see KZ himself but heard from another detainee that KZ came to the camp in the morning and left.

Assessment: This case does not have a chance. On any ground KZ will be free from this accusation.

It is alleged that in November 1971, under the instruction of KZ, some members of Al-Badr abducted Tunu and one Jahangir from Golki Bari and took them to the District Council Dak Bungalow in Mymensingh. Tunu was tortured to death. Jahangir was detained but freed later on.

Position: Unfortunately the prosecution failed to produce any witness.

Assessment: This case does not have a chance.

It is alleged that on Ramadan 27, Tepa Mia and his elder son Zahurul Islam Dara were abducted by Kamaruzzaman, who was accompanied by 15-20 armed Al-Badr members from Golapjan Road, Mymensingh. They were taken to the Al-Badr camp at District Council Dak Bungalow. The next morning, along with five others, the father and son were lined up on the bank of river Brahmaputra. Tepa Mia, when he was about to be charged with a bayonet, jumped into the river. As the collaborators fired at him, he received injuries in the leg but managed to escape. But the remaining six got killed.

Position: Unfortunately the prosecution failed to produce any witness.

Assessment: This case does not have a chance.

Conclusion:  In case 1, prosecution failed to bring main witness who actually the victim of the case despite he remains alive! With secondary witnesses and their contradictory statement cannot prove KZ is guilty. In case 2, despite victim family claimed they filed a case against KZ in 1972, soon after incident took place, they fail to provide document to prove this claim. Rather defence produced FIR that shows KZ was not in that case.   In case 3, prosecution produced "camera trial" testimony, where they wrote whatever they like and proved inconsistence and irrelevant in investigation. Moreover, hearsay from third party is not sufficiently enough to prove KZ is guilty. In case 4, a then 11 years boy who is a govt party activist gave witness testimony hearing from third party,  A hearsay cannot be verified by another hearsay. In case 5, interestingly prosecution's witness gave testimony in favour of KZ that he was involved with the crime accused, so proved his innocence. In case 6 and 7, it is not necessary to be lawyer or expert in law to understand what would be the possible outcome in justice carried out fairly. Prosecution failed to produce any witness for the allegation.

Possible Verdict: From the above discussion, it can be conclude that Kamaruzzaman is innocent and never involved with the heinous crime accused against him. So, he should be free without any condition.