‘How do we keep up the fight for democratic values? With solidarity and storytelling’ 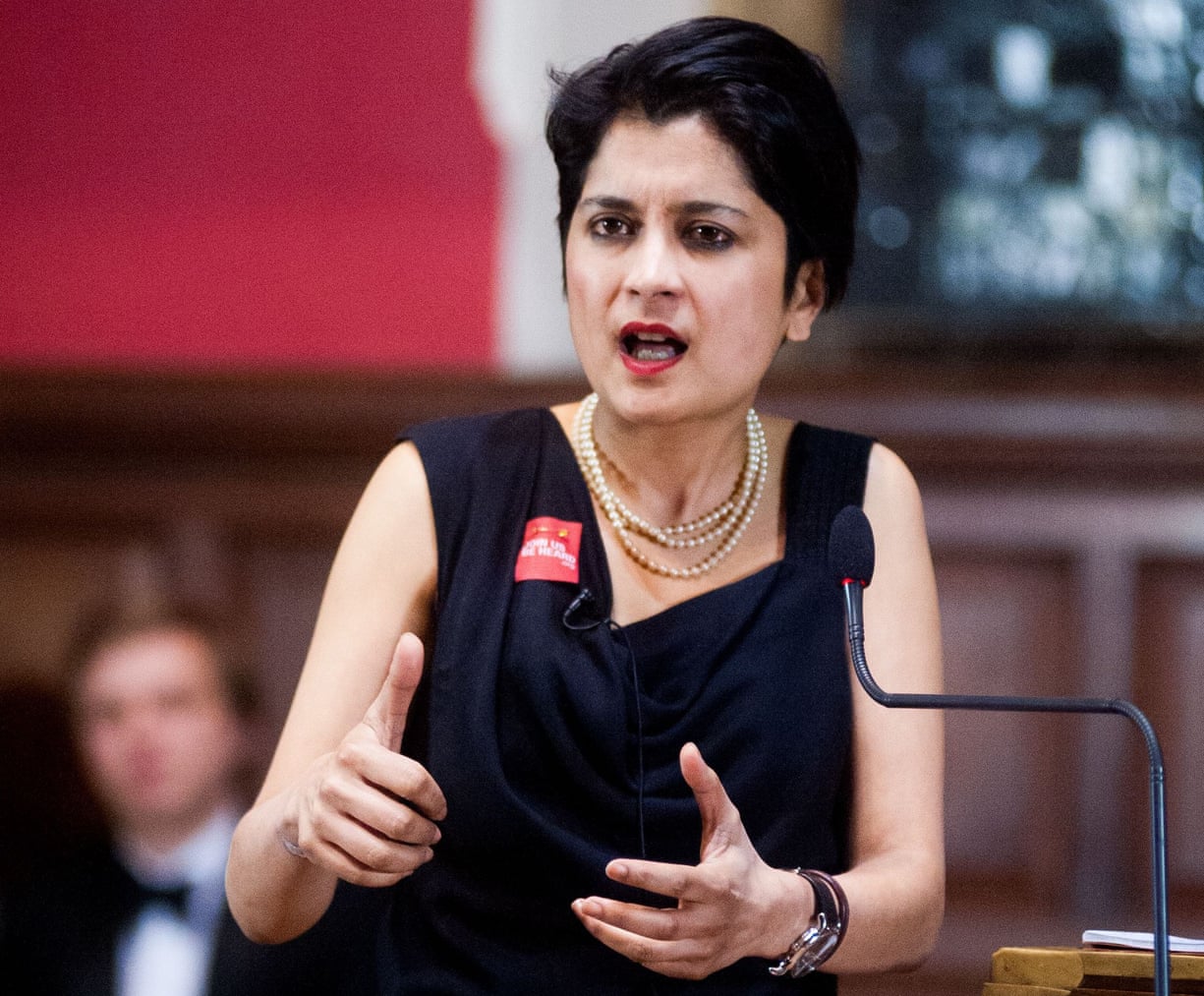 Shami Chakrabarti taking part in a debate on free speech at the Oxford Union in March [Photograph: Roger Askew/Rex]

Words, first spoken, then delivered by script, print and now digital media, remain the principal means by which humans may contemplate, negotiate, mediate, adjudicate and agitate for a different world without constant need of violence. And human rights are the only truly universal language other than war. In the words of the preamble to the Universal Declaration:

… it is essential, if man is not to be compelled to have recourse, as a last resort, to rebellion against tyranny and oppression, that human rights should be protected by the rule of law …

So far, so rational and legal. But this is only half the story. We are creatures of faith and reason, emotion and logic, and so non-coercive persuasion cannot be the preserve of law, politics and diplomacy alone. As a recovering lawyer, I have always known the power of great storytelling, whether of the factual or non-factual variety, of truth-telling in moving people, sometimes more profoundly, than mainstream politics or even the law.

Great writers have always been a part of Liberty’s story. Founded in 1934 in response to the violent suppression of hunger marchers and in the shadow of the rise of totalitarianism in Europe, our early membership was as rich in writers as lawyers and political activists. EM Forster, Vera Brittain, HG Wells and AA Milne, to name but a few. And that tradition continues today with a host of great contemporary writers who have graced our campaigns with their words and values in the most challenging times for human rights.

But as with all powerful tools, words aren’t purely benign. I learned early on that there are certain adjectives I should seek to avoid for fear of public groans: one is “Orwellian”; another, “Kafkaesque”. I look forward to a new adjective named after a female writer. But Orwell’s genius in Nineteen Eighty-Fournotwithstanding, my idea of the truly “Orwellian” has never been about the precise numbers of CCTV cameras on our streets or even the breathtaking internet surveillance capacities being debated in Britain and across the world in a climate of fear.

It is true that politics and the law have lagged behind rapidly evolving technology and social media. A terrified state wants to know who you communicate with and how, when, where, how often and for how long. It wants to know this about every man, woman and child, both in the UK and well beyond. Laudable and understandable justifications inform these impulses; there is no doubt that crime and terror can be – and are – planned and perpetrated online. But consider the extent to which young people in particular now live their most intimate lives online. To scoop up everyone’s data on the off chance that at some indefinite point in the future some of us will fall under suspicion, or for the purpose of a “trawling expedition” to find potential suspects, is the 21st-century equivalent of planting cameras and microphones in every family home.

“Orwellian” to me evokes his 1946 essay “Politics and the English Language”, and the way in which the abuse of language can lead to the contortion of truth and, ultimately, the abuse of people themselves. The self-styled Islamic State can dehumanise the Parisian victims of its recent barbarism as long as they are “crusaders” or “pagans gathered for a concert of prostitution and vice” rather than the easy innocent civilian targets that they plainly were. And when will our leaders learn from the misjudged, misnamed “war on terror” and the language trap that both dignifies the enemy and undermines our own democratic doctrine? Terms such as “detainee”, “water-boarding” and “extraordinary rendition” became more palatable euphemisms for “prisoner outside the law”, “drowning”, “kidnap and torture” in freedom’s name.

So for good or ill, language is powerful, and to share or democratise that power we all need to own it and explore it with the skill of scholars and the confidence of kings.

I finished writing On Liberty over a year before May’s general election. The paperback came out this autumn as the great and good of British politics, law and civil society continued to celebrate Magna Carta’s 800th anniversary. I am sad that so many of my earlier predictions proved correct. A new Conservative government – though one with a slim majority of only 12 seats in the Commons – has indeed stated its intention to scrap our Human Rights Act. Even the possibility of withdrawal from the European Convention on Human Rights, alongside the in-out referendum on the European Union, is now firmly on the table, and the two issues are now commonly and deliberately confused.

Months before the recent Paris atrocity, senior British politicians rushed to the French capital to say “Je suis Charlie” in passionate defence of the free expression of murdered journalists, only to return to London with promises of crackdowns on debate in mosques and universities as part of their “domestic extremism” agenda. The relevant consultation paper talks of refusing to engage with and denying platforms to extremist people who fail to share our “British values”, thus denying the universal values that we share with all democrats and the vital importance of winning the battle of hearts and minds with open engagement and fierce debate.The deeper, broader attack on universal human rights values has found tragic and graphic demonstration in the shameful spectacle of desperate refugees being left to drown, not in some faraway ocean, but close to home in the Mediterranean, where so many British families have happily splashed in the decades of the democratic package-holiday age. From WH Auden’s“Refugee Blues” to Benjamin Zephaniah’s “Refugee Boy”, great creative writing is capable of inducing empathy for these most vulnerable of people; something that modern politics hasn’t quite managed.

PiIf clunky bureaucracy and populist politics weren’t bad enough, on some campuses the students (like some sisters before them) are “doing it for themselves”. My inbox is overloaded with invitations to “no platform” the disagreeable, objectionable and just plain wrong people with whom I disagree, as with (apparently not ironic) invitations to Magna Carta celebrations from those who destroyed legal aid and would scrap the Human Rights AcTo be clear, just as libraries should be free and open, and books must be saved from the fire every time, debates, however shocking, difficult and painful, must be had. There is no such thing as no platform in the internet age, merely closed and narrow platforms where hate goes unedited and unchallenged by humanity and reason.To quote the great American journalist Ed Murrow, working under the pressures of McCarthyism in the 1950s: “We must not confuse dissent with disloyalty.”If only our leaders would listen. They use human rights abuses as reason for military intervention over there but threaten human rights protection here at home.

They stand in solidarity with the people of France and other democracies while threatening to pull out of the human rights conventions that bind us together. Access to justice by way of free or affordable legal advice and representation has all but been obliterated, secret courts have been instituted and judicial review curtailed.Our leaders weep hot tears for peaceful dissenters elsewhere in the world while instituting draconian anti-trade union laws here in the UK. Union elections should require super-majorities to be lawful. Picket organisers must wear armbands and report to the police. And we the people, the whole people – not just one minority or group this time – must face a level of intrusive surveillance unprecedented in the democratic world because, when you’re looking for a needle, build an ever greater haystack. And when you’re defending attacks on democratic values from the outside, undermine them from within.

There is a danger in my work – or, who knows, perhaps in my personality – occasionally to descend into the grim. What ultimately helps is history and solidarity; the knowledge that we are not alone in our concerns in the present moment or in a longer story of humanity that can teach us so much. But a great deal of history is dominated by the rich and the powerful and, frankly, by men. How rare to find, for example, a biography of a woman who wasn’t a queen or courtesan, let alone an account of a great activist and woman of letters such as Rachel Holmes’s Eleanor Marx: A Life. Holmes’s account of the first ever May Day demonstration, and Eleanor Marx’s speech, is a read to lift the mind and heart of any despairing person in difficult times. At its concluding point Marx paused, then rolled out Shelley’s great thunderous invocation to working-class Englishmen and women in “The Masque of Anarchy”:

Rise like Lions after slumber
In unvanquishable number,
Shake your chains to earth like dew
Which in sleep had fallen on you –
Ye are many – they are few.