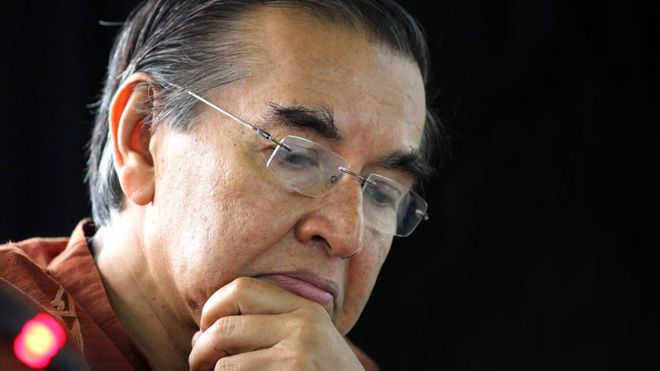 Image: Mahfuz Anam has been accused of treason

It can seem a bit self-righteous when journalists write about the importance of freedom of the press, a bit like a chef celebrating the virtues of a fancy meal or a hairdresser extolling the importance of a new haircut.

But the public's right to know what is really going on in their country really is the cornerstone of a free society. Without free access to information, backed up by journalists who are willing to dig down and get to the truth, all the other liberties celebrated in democracies are endangered.

That's why the world should be worried by the concerted attacks on one of the leading newspaper editors in South Asia, Mahfuz Anam of Bangladesh's Daily Star.

The Daily Star is the most popular English-language newspaper in Bangladesh. It was launched as Bangladesh returned to parliamentary democracy a quarter of a century ago, and has always had a reputation for journalistic integrity and liberal and progressive views - a kind of Bangladeshi New York Times. That's why it is so shocking that Mr Anam now stands accused of treason, no less.

Sajeeb Wajed, the son of Prime Minister Sheikh Hasina, has described him as "completely unethical" and a liar, and has demanded he be thrown in jail. Mr Wajed is at the head of a queue of dozens of politicians, student agitators and others who have launched criminal defamation charges against the eminent editor.

I will go into the details of the allegations against Mr Anam in a moment, but first it is important that the claims are set in context, because it is hard not to see this as the latest line of attack in a concerted effort to gag one of the last independent media organisations in the country.

The Daily Star and its sister publication Prothom Alo - the most widely read Bengali newspaper in the country - are already the subject of a clandestine attempt to undermine their finances.

The BBC understands that since last summer businesses, including some of the largest telecoms and consumer goods companies in Bangladesh, have been ordered to restrict their advertising in the two newspapers by the country's military intelligence agency.

The Norwegian company that owns Grameen Phone, Bangladesh's largest mobile phone operator, has admitted as much to Al Jazeera. Telenor's head of communications confirmed that, "along with several other large corporations, [it] received an instruction from the authorities to stop advertisements in two leading newspapers in Bangladesh". The Daily Star and Prothom Alo are reckoned to have lost about a third of their income. 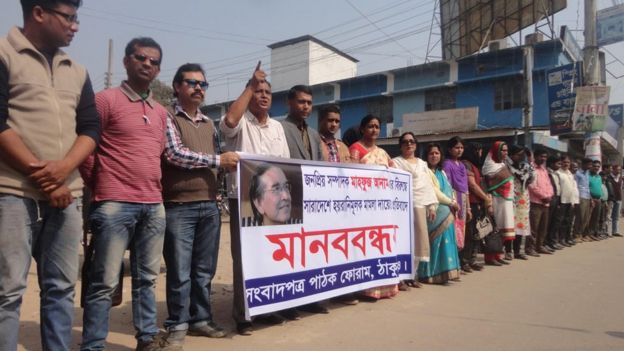 Image: Demonstrators in Thakurgaon formed a human chain to protest against the charges brought against Mr Anam

Yet the order has no basis in law, according to the leading commentator on Bangladeshi politics, David Bergman. "It is simply 'enforced' through the authority that comes from being the country's most feared intelligence agency," he argues.

But its intent is clear: it is about bringing independent media into line and stifling dissent. The message is "cross the line and we'll take action", but since no clear line has been drawn it is up to the media to police itself. And it seems to be working.

"There is not a single newspaper or TV editor in this country who does not know about the blockade," writes Mr Bergman, "yet not one of the nearly 30 TV stations, nor one of the countless newspapers has reported about this intimidation of the Daily Star and Prothom Alo." 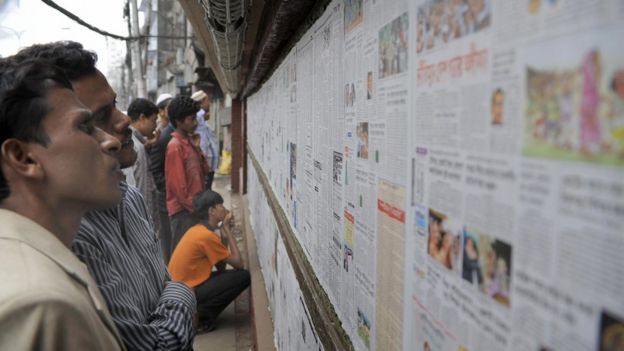 Image: The advertising restrictions have received little coverage in the Bangladeshi press

When I spoke to Bangladeshi information minister Hasanul Haq Inu, he denied that he knew of any such order. He told me that if the newspapers or any of the companies involved register an official complaint, he would be happy to investigate, and said that if any illegal restriction is being imposed on businesses in Bangladesh, he will take action.

While the restrictions on advertising in the Daily Star are not getting much attention in the Bangladeshi press, the allegations of treason by Mr Anam are getting plenty of publicity. That is because Mr Anam has admitted he has made mistakes.

In a television interview earlier this month, he conceded that reports published in the Daily Star in 2007 alleging corruption by the woman who is now prime minister were based on uncorroborated leaks from the then military government.

He said he was wrong to have published them. "It was a big mistake," he said during the interview. "It was a bad editorial judgement, I admit it without any doubt." 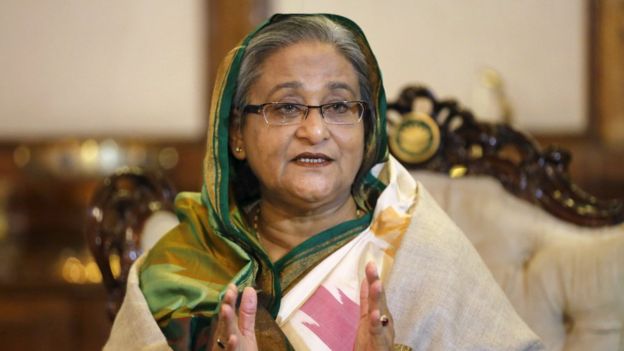 But whether his mistakes constitute treason is another matter entirely. The prime minister's son claims that the articles were an attempt by Mr Anam and the Daily Star to "support a military dictatorship in an attempt to remove my mother from politics". That is something Mr Anam vigorously denies, with justification.

He points to 203 editorials published during the period of military rule demanding that democracy be restored. That amounts to one every three days of the so-called "emergency government". He also points out his newspaper was very critical when Sheikh Hasina was arrested in connection with the corruption charges.

"To us Sheikh Hasina's arrest is totally misconceived and smacks of arrogant use of power without due process of law," his editorial thundered, the day after the arrest was made.

What is more, none of the allegations against Sheikh Hasina and other party members was ever tested in court because all charges were dropped by executive order when her Awami League assumed power in 2008.

By contrast, similar claims of corruption made against the main opposition party, the Bangladesh Nationalist Party (BNP), were allowed to stand. Many BNP politicians are still technically on bail from the charges. 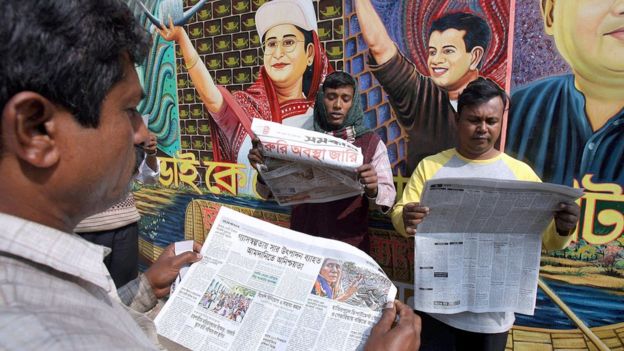 Image: Some believe attacks on newspaper editors are 'an attempt to crush independent media'

Mr Haq, the Information Minster, denies there is any campaign against the Daily Star. He says the complaints against Mr Anam are being made by individuals and are not being co-ordinated by the government. "A judgement on whether he is guilty will be made by the courts on the basis of the merits of the case," he told me.

But Mr Bergman has no doubt about the real significance of these attacks on Mr Anam. He believes they are "an attempt to crush independent media". He is convinced that government loyalists want "to close down, or at least subdue, any influential independent media or dissent that is not within their control".

That would represent a very sinister power grab in an already fragile democracy like Bangladesh. Since Bangladesh's media appears too cowed to speak out, it is time the rest of the world does.

The International Federation of Journalists (IFJ) has condemned what it calls the "legal harassment" of Mr Anam. Now governments must do the same.

And where better to start than the UK government?

A few weeks ago Alison Blake, the new British High Commissioner to Bangladesh, was celebrating how "as two Commonwealth countries, we share a set of core values, including a commitment to Parliamentary democracy and a tolerant and pluralistic system with a commitment to protect and uphold human rights".

It might be time Ms Blake challenges the Bangladeshi government to deliver on that commitment.